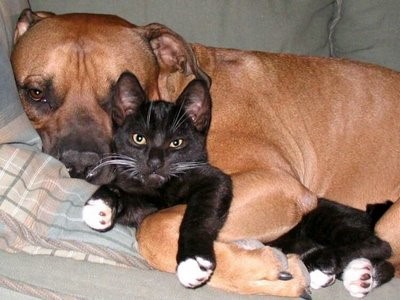 Thornton Penny, a Shih Tzu-poodle mix, was increasingly forgetful, often coming into a room and then being unable to find her way out. She slept during the day, wandered at night and showed little interest in eating. A visit to her veterinarian, Robin Downing of Windsor, Colo., found no obvious reason such as an ulcer or cancer for Penny’s behavior.

After ruling out health problems that could cause similar signs, Downing suspected that Penny had cognitive dysfunction syndrome (CDS) — what in humans is called senility or Alzheimer’s disease. She recommended a diet rich in omega-3 fatty acids and other antioxidants and prescribed a drug called selegiline, or Anipryl, which affects attentiveness and the sleep-wake cycle.

“We saw a difference within 30 days,” Downing says. “That medication altered her concentrations of brain chemicals and altered her behavior for the better.”

As dogs and cats live longer — thanks to improved nutrition, better veterinary care and home environments — they’re developing problems of old age that previously were rarely seen in pets simply because they never made it to extreme old age, which is upwards of 20 years for cats and small dogs, and about 12 or 13 years for medium and large dogs.

“The older they get, the more signs they get,” says Melissa J. Bain, a veterinarian at the University of California School of Veterinary Medicine in Davis.

Recent research has shown that nearly a third of 11- and 12-year-old dogs and two-thirds of 15- and 16-year-old dogs have significant cognitive impairment. In cats, as many as 80 percent of those over the age of 16 show signs of senility.

Penny will be 19 in June, so she’s at the far end of the age spectrum for dogs. But physically she’s still in reasonably good condition. What’s important for Penny and dogs and cats like her is that diet and medication, as well as control of underlying conditions that contribute to CDS, can often help slow the progress of CDS and improve quality of life.

The acronym DISH spells out the behaviors often seen in dogs and cats with CDS:

While some of these behaviors can be chalked up to cognitive misfires, others have simpler causes that are treatable with medication or simple environmental changes.

For instance, loss of house-training may be due less to senility than to aching joints.

Here are some steps you can take to help your aging dog or cat:

“When they lose their litter-box training, it’s not that there’s anything wrong with their intention,” Gunn-Moore says. “It’s that they can’t get into the box or they can’t crouch their bottom down properly because of arthritis in the hips and knees.”

The same holds true for dogs. A dog with arthritic hips won’t have much incentive to use a pet door that bangs its rear end as it goes out or comes in. Underlying urinary tract infections also can contribute to loss of house-training. Pets with kidney disease or diabetes often have urine that looks sterile under a microscope but may actually be seething with bacteria.

Get their pressure checked High blood pressure is another issue facing older pets. You thought only Grandma Kate got hypertension? Think again. High blood pressure is common in aging pets, especially if they have ailments such as kidney disease or Cushing’s disease, a condition caused by the production of too much adrenal hormone.

How is that linked to senility? Just as in people, hypertension takes a toll on blood vessels in the brain. Many cases of senility in humans are related to chronic high blood pressure, Gunn-Moore says. The good news for animals is that medication can help lower it to safer levels.

The best thing you can do for your older pet is to be alert to changes in behavior. Downing believes that’s why Penny responded so well to medication, becoming more interested in going for walks and interacting more with her owners.

“I think I had a chance to intervene with her earlier than I would have in a typical pet because her owners were so tuned in to her and the subtleties of her behavior,” she says. “They picked up early that something wasn’t quite right.”

Kim Campbell Thornton is an award-winning author who has written many articles and more than a dozen books about dogs and cats. She belongs to the Dog Writers Association of America and is past president of the Cat Writers Association. She shares her home in California with two Cavalier King Charles Spaniels and one African ringneck parakeet.

6 Signs of Stress in Dogs
Scroll to top We are Open, Call Now!