My name is Sue Christensen and I would like to share my personal experience with Xylitol with you. I am a Colorado Springs resident, and would like to educate others on the effects of Xylitol- it CAN and WILL harm your dogs. I was the lucky mom of two dogs, Jasper and Peaches, little terriers that we loved so much they were like our children. Jasper and Peaches are now gone – they died on Friday, 15 November. On Wednesday, 13 November, my dogs were poisoned by something that was likely thrown into our yard. The poisoning was caused by ingesting something with an ingredient commonly found in diet products called Xylitol – it is in sugar free gums and breath mints (including Starbucks mints, Trident, Ice Breakers, Orbit), some toothpaste, chewable vitamins and other supplements, even Nicorette gum. Commercially, the most common source is corn stalks and corn cobs. Other names for Xylitol are sorbitol, malitol, sugar alcohol; chemical names are Birch Sugar, polyol, E967, Meso-Xylitol, Méso-Xylitol, Sucre de Bouleau, Xilitol, Xylit, Xylite, Xylo-pentane-1,2,3,4,5-pentol. Xylitol is 100 times more poisonous to dogs than chocolate or raisins/grapes, which can also kill our beloved dogs. Xylitol is so highly toxic to dogs that even a couple of pieces of gum or a couple of breath mints will cause acute hepatic necrosis, hypoglycemia (low blood sugar), liver failure, kidney failure and death. This is what happened to Jasper and Peaches. Silly dogs, they would eat anything that came their way. By Wednesday night, the dogs were vomiting uncontrollably and we brought them to the vet on Thursday. After doing extensive testing and blood work, the vet determined they’d ingested Xylitol which caused a dangerous drop in blood sugar resulting in vomiting, weakness, lethargy, loss of coordination, bloody diarrhea, collapse, and seizures. Even though the vet put my babies on IV drips with sugar to replace the loss in their systems, irreversible brain trauma had already occurred and their internal organs were shutting down. When Jasper started seizing on Friday morning, we held him as he died in our arms at the age of 5. Hoping that Peaches might still have a chance the vet continued to treat her but Friday evening, as I rocked her and held her in my arms and told her I loved her so much, she looked up at me one last time and stopped breathing and I had to say goodbye. She was just 12 years old – she was my dearest love. 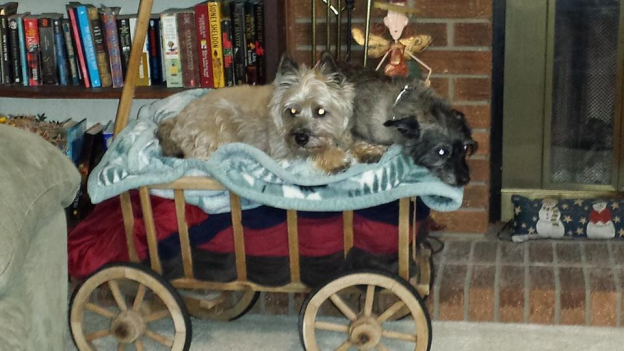 We adored our dogs so much and can’t believe that they are gone. And we may never know just what happened that killed them. Some our fellow neighbors have said they have seen someone throwing things into our yard, but we will never know. Certainly I never knew that a couple of Tic Tacs or pieces of chewing gum could end my beloved dogs’ lives. Apparently Xylitol was not used much in American products until about 2004 when Trident starting adding it to some of its gum, followed in 2006 by Wrigley’s Orbit line. But more recently, it has started showing up in other products, like Flintstones vitamins and Jell-O. Xylitol is becoming more and more common in food and hygiene products, and not just for its sweetening properties. Apparently, it has been shown to provide oral health benefits because it starves the plaque-inducing bacteria and kills them and is now in toothpaste and other dental products. You’d think it would be easy to simply eradicate this product from the market given its extreme dog toxicity, but here’s the trouble: they think Xylitol is a great product. It’s natural, just as sweet but less caloric than sugar, doesn’t raise insulin levels and seems to reduce the kinds of oral bacteria associated with dental disease. Diabetics rave about it. Dentists do, too. All of which is why consumer product manufacturers have been slowly replacing their sweeteners with xylitol. They tout this as a good thing but to dogs it is simply lethal. If you are interested here are some articles on Xylitol poisoning in dogs:

Household Items That Are Poisonous to Your Pets

The Coolest Cat Rescues in the Colorado Springs Area!
Scroll to top We are Open, Call Now!